Could you imagine a world heritage listed national park that’s bursting with Aussie wildlife, thick eucalypt rainforest, spectacular waterfalls, home to the oldest indigenous living culture on the face of planet earth with some of the most Instagram worthy views on the planet.

Sounds a little too good to be true doesn’t it?  Well the truth is… its not and all of this is located in the Blue Mountains National Park, just over an hour from Sydney.

We are going to give you some top tips on how to get the most out of your visit to the Blue Mountains.

Overview (think table of contents) what steps traits rules (the frame you choose) need to be taken to implement, master, learn or understand. Again, sound conversational as if you were talking to someone

You would be hard pressed to find more spectacular sightseeing in the world than the Blue Mountains.  What many people don’t know, is that this place lights up to a whole new level during sunset.

The most spectacular sightseeing location within the Blue mountains would have to be the world famous three sisters, its unquestionably one of Australia’s top icons… but what people don’t know is visiting this place at sunset takes sightseeing to a whole new freaking level.  Don’t take my word for it check out the photos below taken on our blue mountains tour at sunset.

Jamison Valley lookout is perhaps the next most spectacular attraction whilst visiting the Blue Mountains.  On approach, you’re not quite sure what to expect… as you inch closer towards the viewing lookout, it soon becomes apparent you have arrived somewhere special. A massive canyon that opens up with stunning awe-inspiring scenery that will blow you away.

Darwin made journal entries about “a thin blue haze”, caused by vapour emitted by the billions of eucalyptus trees.

Where do you find the most incredibly unique wildlife? Well I think most people who haven’t even visited Australia could answer that question.  Less than a couple of hours from Sydney you can have it all and more.

Finding the best locations to view some of the most iconic Australian wildlife can be difficult if you’re not a local.  The good news is you can engage some local tour operators like Wildlife Tours Australia who specializes in Blue Mountains Tours and wildlife spotting in their natural environment.

Here are our favourite three Aussie Animals to look out for:
Kangaroos, Koalas and the iconic Kookaburra.

Here’s a few cheeky pics we managed to capture along our journey.

One of my favourite stories about Aussie wildlife relates to the bizarre kangaroo. The story of the first European encounters with a kangaroo.

A widely held belief has it that the word kangaroo comes from an Australian Aboriginal word meaning “I don’t know.” This is in fact untrue. The word was first recorded in 1770 by Captain James Cook, when he landed to make repairs along the northeast coast of Australia. In 1820, one Captain Phillip K. King recorded a different word for the animal, written “meenuah.” As a result, it was assumed that Captain Cook had been mistaken, and the myth grew up that what he had heard was a word meaning “I don’t know” (presumably as the answer to a question in English that had not been understood). Recent linguistic fieldwork, however, has confirmed the existence of a word gangurru in the northeast Aboriginal language of Guugu Yimidhirr, referring to a species of kangaroo. What Captain King heard may have been their word minha, meaning “edible animal.”

The Spectacular waterfalls of the Blue Mountains.

When it comes to spectacular waterfalls, the Blue Mountains is spoiled for choice, here are some of our favourites. 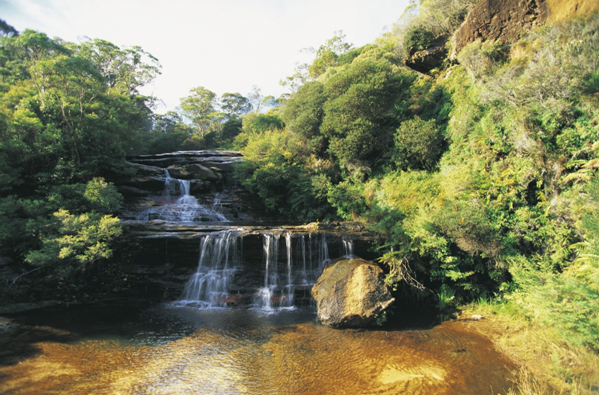 Let’s dig a little deeper and head waaaay back…. Like 60,000 years ago, that’s how long the indigenous people of Australia have been living in this spectacular country, and you about to learn all about it during your visit to the blue mountains.

The Aboriginal and Torres Strait Islander go back to at least 50,000 years. Some argue that it is longer than that and closer to 65,000 years.

Today less than 20 languages are spoken by all Indigenous groups. The precise number of Australian Indigenous languages is unknown, but according to the National Indigenous Languages Survey, it was thought that when colonists arrived, there were over 250 languages. In recent times, 100 of those languages became unspoken, and the rest are highly endangered.

Most of the words borrowed from the Indigenous languages are nouns. Some of these words are koala, wombat, barramundi, kookaburra, boomerang, yakka and bung – which is an adjective for bad or diseased.

Also, the word kangaroo comes from an Aboriginal word. The word originated from Captain James Cook’s visit to what is now called Cooktown to do some repairs on his ship.

Many cultural protocols govern Indigenous communities. When it comes to death, members of some cultures refrain from mentioning the name of, or viewing images of deceased persons as a sign of respect to the person as well to their grieving family.

The avoidance period may last anywhere from 12 months to several years, and the length of this time is determined by the community. This has been reflected in the Australian media, where journalists need to respect these practices and refrain from using names of deceased people.

Dream time refers to the Indigenous understanding of the world’s creation. It is a continuing story that never ends. Unlike other religions, Aboriginal people do not put humans on a level higher than nature. They believe that some of their ancestors changed into nature, where they live spiritually

Below is an illustration of the Australian aboriginal flag. The red represents the scorched earth, yellow is the giver of life, the sun and the black represent the people.

Sensational walking trails through lush rainforest of the Blue Mountains

Just when you think the Blue Mountains couldn’t possibly have any more to offer, it’s the walking trails through lush rainforest that really open this place up to experience its true beauty on an intimate level.

The Blue Mountains locale is a genuine heaven for bushwalkers with truly many lovely strolling tracks to look over. A portion of these climbs have been around for over a century while others have just been opened to people in general as of late.

Here are 3 of the best strolling tracks in the Blue Mountains. Some of them are short and simple trails, others are significantly harder tracks that require a decent measure of planning.

Frequently viewed as a standout amongst the greatest strolling trails in the Blue Mountains district, the Grand Canyon Walk will abandon you in wonder as you advance through rich rainforest with a few brook intersections, little waterfalls, gigantic sandstone dividers and shake overhangs.

Opened to the general population in 1907, the 6km long Grand Canyon strolling track was the first of its kind in the Blue Mountains and has since been tested by a great many climbing devotees every year.

Frequently disregarded by sightseers, the circuit strolling track to Katoomba Falls carries you very close with a standout amongst the most excellent waterfalls in the Blue Mountains.

This short yet beautiful strolling trail begins comfortable World and aides you through lavish rainforest the distance to Katoomba Falls with all-encompassing perspectives over the valley underneath.

The waterfall shapes some portion of the Kedumba River and slides around 150 meters into the gigantic Jamison Valley.

Worked toward the beginning of the twentieth century with picks, scoops and explosive, the National Pass is a standout amongst the most acclaimed bushwalks in Australia.

Beginning at the Wentworth Falls outing zone, this 4.5km circuit trail passes a few posts with all-encompassing perspectives of the well-known Wentworth Falls and the Jamison Valley, with areas of the track incorporated with the side of the bluff.

Feature of the track is The Grand Stairway, an arrangement of hand-cut stone advances that gives climbers access to the valley beneath Wentworth Falls.

There are several ways you can explore the Blue Mountains either by self-driving or jump on a tour as we did. There are several different options for local tours. Two of the best options are with local operators like these guys or www.wildlifetours.com.au.